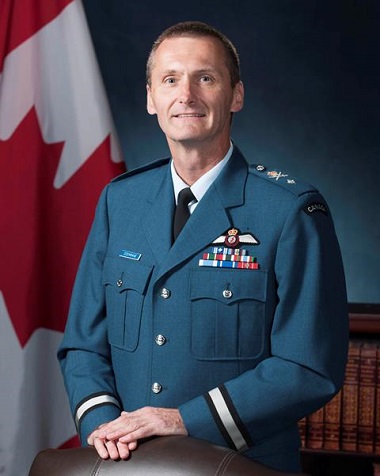 Brigadier-General D. B. Cochrane oversees tens of thousands of young people across Canada, in his responsibility as Commander National Cadet and Rangers Support Group. It includes all the regiments of Air, Sea, and Army Cadets as well as Junior Canadian Rangers, a volunteer force made up of Inuit, First Nations, Métis and non-Aboriginals patrolling Canada’s sparsely settled northern, coastal, and isolated areas.

The Commander’s commendations are considered one of the highest honours ever received for activity within those groups of dedicated youth.

On January 23, Lieutenant-Colonel Dore, on behalf of General Cochrane, is responsible for 17,000 cadets across Central Ontario, was welcomed by the 104 Squadron ‘Starfighter’ Air Cadets during their Commanding Officer parade. With him was Chief Warrant Officer Godbout, Regional Cadet Support Unit Central Colonel Dore spoke to the Cadets about his pride of their commitment and discipline and incredible volunteerism appreciated across the nation. The Colonel, on behalf of his Commanding Officer General Cochrane, called on Warrant Officer Second Class, Abigail Sullivan to accept the commendation accompanied by her proud parents. At the time of the incident which resulted in the award, then a Sergeant, Sullivan accompanied by a Junior Cadet were fundraising on behalf of the 104 ‘Starfighter’ Royal Canadian Air Cadets at a local store in Brantford. In front of them a terrible auto accident occurred and Sgt. Sullivan’s cadet first aid training kicked in. Sullivan rushed over to help an elderly lady struck by a car, took control of the scene and immediately began CPR. She continued until Emergency Medical Services arrived. Flight Corporal Kitchen was recognized for his extraordinary personal initiative in recruiting for and commanding the Squadrons drill team. His efforts in promoting the team locally resulted in an eleven-member team who have been practicing under his leadership since November.